UPMS Drama Club Production of “Princess Who?” is Full of Laughs and Fairy-Tale Mystery 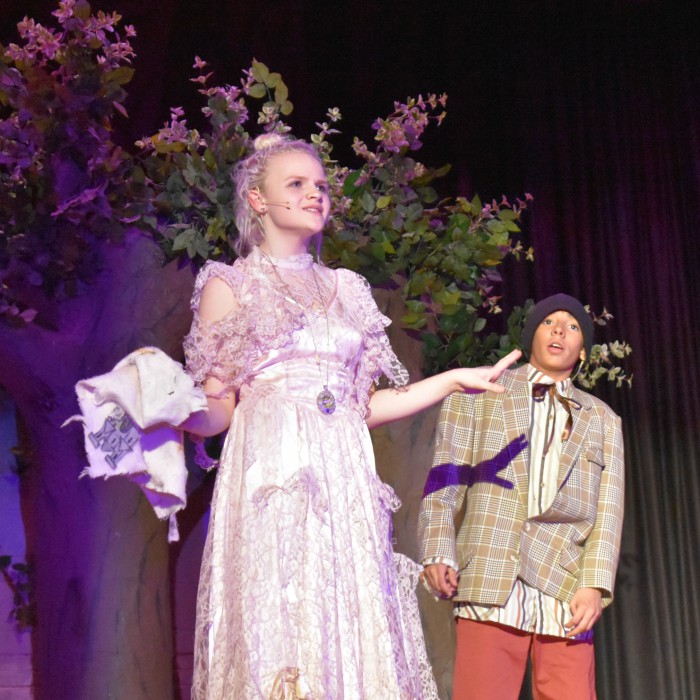 Setting the scene: A girl wakes up in the forest, with no memory of her past. As she searches for clues to her identity, she encounters an array of colorful fairy-tale characters, including Rumpelstiltskin (pictured at right with the title Princess), Goldilocks and the Three Bears, Snow White and the Seven Dwarfs and more. These characters all share clues that help the girl in her desperate search for her home.

That is a little about the fairy-tale mystery “Princess Who?” which was recently presented by the UPMS Drama Club. What the plot summary doesn’t tell you is that the Drama Club’s production was full of unexpected laughs, hilarious improv, great chemistry between characters and one all-too-ironic cameo.

The production ran four different times: A free senior citizens show on Feb. 21, public shows on Feb. 23 and 24 and a show for 5th graders on Feb. 26. Check out a slideshow of images from the show below.

Some highlights of the show included:

The show, which saw a full house for both public performances, was put on by director Pam McGovern and assistant director and props & house manager Mary Wietecha. Costumes were designed and created by Judy Rinehart, sets were designed and built by Marty O’Connor and Kevin Stephenson and programs and tickets were coordinated by Joann Broney.

“Princess Who?” is by Brian D. Taylor and was produced by special arrangement with Pioneer Drama Service, Inc., Englewood, Colorado.

The next UPSD production will be the high school’s presentation of Rodgers & Hammerstein’s Cinderella, on March 7-11. March 7 is a gold card show for senior citizens, March 8 is student night and March 11 is a children’s show. Tickets are available online and will also be sold at the door.